Lawless Britain and the Crime Industry 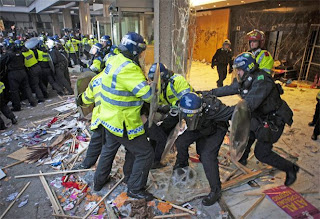 
Following the riots that occurred in towns and cities across England between 6 and 10 August 2011, the Prime Minister, Deputy Prime Minister and Leader of the Official Opposition established the Riots Communities and Victims Panel and asked it to consider:

What this blog said at the time:


As the police announce that arrests and convictions in the recent riots and looting have exceeded 1,000 we pause to remind ourselves that lawlessness is not a freak event in British culture.

Perhaps we should be surprised that so few took to the streets in the recent festival of transgression. The millions of British people who already have a criminal conviction do not need a politics or a rationale to explain their actions.  It's the lack of a coherent or declared politics in the recent events that is most disturbing and a sufficient cause for future anxiety.

Let's remember that the BBC reported in 1999 that one third of British men will will have a criminal record before reaching the age of 40. Sadly, crime appears to be an inevitable rite of passage for a significant minority of young men.

What's striking here is age and gender. But it would also be a mistake to exclude colour, education and deprivation as key factors and determinants as well. These factors are well-documented in all crime and social statistics from government sources.

The riots are really the thin end of the wedge once we consider the potential for criminality in the population at large. As society begins to ponder the underlying issues we ought to reflect what kind of social forces have led to this sad state of affairs. A debate that confines itself to the recent actions of disaffected youth will not I suspect, adequately address the situation.

Crime is now one of the biggest industries in the UK. It's one sector that also grows during the recession. The direct and social cost has been estimated at £40 billion. The emotional and personal costs to victims are more difficult to evaluate. Examples of creative thinking on this topic would be very welcome.

Following the riots that occurred in towns and cities across England between 6 and 10 August 2011, the Prime Minister, Deputy Prime Minister and Leader of the Official Opposition established the Riots Communities and Victims Panel and asked it to consider: