Radicals, Revolutionaries and the New Cinema 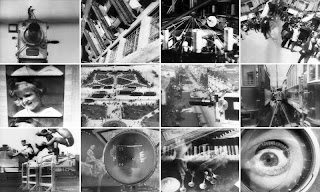 Radicals, Revolutionaries and the New Cinema: Selected Quotations designed to provoke discussion of new technology, collaboration, remixing, machine assembly, participatory cinema and media interactivity:
“The film drama is the Opium of the people…down with Bourgeois fairy-tale scenarios…long live life as it is!”
(Dziga Vertov)
“The anti-bourgeois cinema itself became bourgeois, because the foundations upon which its theories were based was the bourgeois perception of art. The auteur concept was bourgeois romanticism from the very start and thereby … false! […] To DOGME 95, cinema is not individual! Today a technological storm is raging, the result of which will be the ultimate democratisation of the cinema.”
(Lars von Trier and Vinterberg, 1995)
“Kino-Eye means the conquest of space, the visual linkage of people throughout the entire world based on the continuous exchange of visible fact, of film documents as opposed to the exchange of cinematic theatrical representations.” Dziga Vertov)

“Kino-Eye uses every possible means in montage, comparing and linking all points of the universe in any temporal order, breaking, when necessary, all the laws and conventions of film construction.” (Dziga Vertov)

Kino-Eye plunges into the seeming chaos of life to find the resultant force amongst the million phenomena related to the given theme. To edit; to wrest, through the camera, whatever is most typical, most useful, from life; to organize the film pieces wrested from life into a meaningful visual phrase, an essence of “I See” (Dziga Vertov)

Thirty years after his time it became possible to apply Vertov’s injunctions without any loss between the idea—to film everything, record everything, to be in life without disturbing or falsifying it—and its realisation. (Vertov had been restricted to filming public manifestations, crowds, ceremonies, etc and was unable to seize everyday life because his equipment could not pass unnoticed).
(J-L Comolli in Cahiers du cinéma)
“Vertov also has waged fierce, vehement and desperate battles with his materials and his instruments (reality and the film camera) to give practical proofs of his ideas. In this he has failed. He had failed already in the era of the silent film by showing hundreds of examples of most cunning artistry in turning acrobatic masterpieces of peotic jigsaw, brilliant conjuring of filmic association – but never a rounded work, never a clear, proceeding line. His great efforts of strength in relation to detail did not leave him breath for the whole. His arabesques totally covered the ground plan, his fugues destroyed every melody.” (Kraszna Krausz 1931)
Selected readings:
Dziga Vertov: Defining Documentary Film, Jeremy Hicks, London: I. B. Tauris, 2007.
Kino-Eye: The Writings of Dziga Vertov. Dziga Vertov, University of California Press, 1985.