The Comedy of Community Film 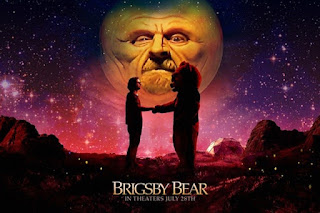 Comedy is often associated most strongly with laughter, with those 'laugh out loud' moments. However, comedy also often includes elements of sentimentality and anguish. On the darker side, the underbelly of comedy is a response to cruelty and dehumanization. Accordingly, how a comic production is to be classified or placed along a spectrum is a difficult task, not least because tastes vary with different people. Brigsby Bear (2017) provides an intriguing case study. In this blog, the film also provides an opportunity to discuss the role of community film making that is depicted in this poignant and sometimes absurd story.

At the outset, geeky James Pope (Kyle Mooney) is leading an infantilized life that is safely insulated from the outside world. His obsession is a children's show called Brigsby Bear, hundreds of episodes of which he has watched on VHS tapes. 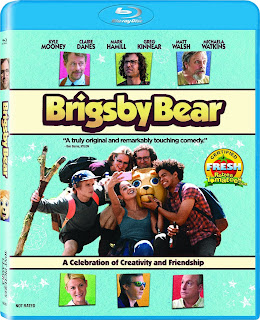 However, [SPOILER ALERT] his 'parents' are actually his kidnappers; they had snatched him as a baby, so he has known no other life. When he is rescued and re-united with his birth parents he must rebuild his life and adjust to a world that he never knew existed.

The film creatively and uncomfortably blurs the boundary between the old and the new world: James is determined to perpetuate aspects of his past (the Brigsby Bear film sequel), while his father wants his son to follow the conventional male trajectory of sport and cars.

Fortunately, James attends a party and meets Spencer (Jorge Lendeborg Jr. ), who shares an interest in film-making. Thus begins a community collaboration that eventually includes a reluctant Detective Vogel (Greg Kinnear) who supplies props confiscated from the abductors' home. Vogel also ends up acting in the film (he had previously played Prospero, which was a nice touch --- "What seest thou else In the dark backward and abysm of time?).

Even the imprisoned 'paternal' abductor agrees to provide a voice recording, perhaps revealing how comedy stretches improbability. The more profound point is that creative community media enable the protagonist to manage his heroes and his demons, and to negotiate his connections with the world on his own terms. His regeneration (and escape from perceived mental illness) is achieved by working with others; crucially, mental health is presented in communitarian terms.

Brigsby Bear presents contemporary social media in the most positive terms. At the same time, face-to-face engagement is also demonstrated in terms of bringing people together to participate in a project. The notion of the audience as co-creators is also touched on. Collective activity turns out to be regenerative and emancipatory. In a heavily sentimental twist at the end of the film James and his father find common ground through the lens of the camera. Film throws back the critical challenge to engage and to connect.


As an assertion of life, love and the human spirit, comedy sometimes operates as a defence against the sinister and the cynical. There is a commonly used formula that states 'comedy unites, tragedy divides'. Brigsby Bear shows that comedy and community can overcome trauma and tragedy, allowing for creativity through connection and connection through creativity.