At the weekend I picked up in a charity ("thrift") shop a short book by world theatre director and experimenter Peter Brook called The Empty Space, first published in 1968, with a Pelican paperback in 1972. There have been several reprints and it's still a thoughtful discussion of the state of theatre. 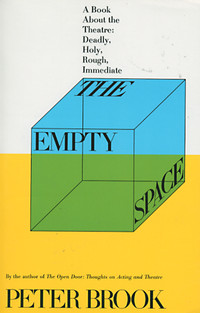 Where he speculates on 'Theatre' I found myself reflecting on 'Cinema.' It's a curious exercise to displace and compare terminologies and discourses. Sometimes it's quite shocking and sobering as a thought experiment.

How have our ideas about the value(s) and function of cinema evolved alongside, or in opposition to 'theatre' ?

If you're curious, his four chapters are titled

I also found myself dreaming about a Secret Cinema. Perhaps a lost chapter of the Brook's book ?

Or, perhaps, more lyrically, a borrowing from the Robert Graves poem Secret Theatre:

When from your sleepy mind the day's burden
Falls like a bushel sack on a barn floor,
Be prepared for music, for natural mirages
And for the night's incomparable parade of colour.

It is hours after midnight now, a flute signals
Far off; we mount the stage as though at random
Boldly ring down the curtain, then dance out our love.

I confess that there are always piles of books around me, some not yet read, delights waiting to be opened, uncovered, discovered. One book on my desk was a novel by Carol Shields called Unless (2002). The novel opens with an epigraph from the great nineteenth-century English female novelist George Eliot:

If we had a keen vision and feeling of all ordinary human life, it would be like hearing the grass grow and the squirrel's heart beat, and we should die of that roar which lies on the other side of silence.

There's something in these books and quotes that would constitute my Secret Cinema. A place perhaps to find Wordsworth's 'still sad music of humanity'; a space for film to have rhythm and intensity, overheard visioning; but also laughter and dance; something rough and grotesque, something holy, sublime and degenerate.

I'm wanting a secret cinema with a living drama of individuation rather than the crude trappings of a consuming and hollow individualism. A living cinema, not a deadly cinema.

My Secret Cinema could be a projection of visionary communion and failed community; a drama of flows and conflicts; laughter and life-worlds; struggles and victories. A spectacle of people, for the people

And I'm not objecting to being entertained either; it would be a valued alternative to cinema as recreational paralysis.

That's the end of my part of the blog, really. I was not intending to write it up until I heard Mark Kermode speaking about his book The Good, The Bad and The Multiplex: What's Wrong with Modern Movies on the BBC Radio 4 tonight. An edited version also appeared recently in The Guardian. I agree with much that he has to say in his criticism of the the big budget blockbuster, the decline of cinema and the rise of commercialism at the expense of a thinking and feeling audience who deserve more than they are offered by the marketing machinery of the film 'industry' and the 'entertainment business'.

But I just wanted to end with some quotes from Peter Brook. He's was worried about theatre. We need to worry about cinema. As the public space declines I'm falling back on my Secret Cinema. See you there?

"The theatre has often been called a whore, meaning its art is impure, but today this is true in another sense  - whores take the money and then go short on the pleasure." (12)

" [...] the theatre has become a deadly business and the public is smelling it out. In fact, were the public ever really to demand the true entertainment it talks about so often, we would all be hard put to know where to begin." (12)

"We expect the so-called hit to be livelier, faster, brighter than the flop - but this is not always the case." (13)

" [...] just the right degree of boringness is a reassuring guarantee of a worthwhile event.  Of course, the dosage is so subtle that it is impossible to establish the exact formula - too much and the audience is driven out of its seats, too little and it may find the theme too disagreeably intense." (13)

" [...] so, tragically, in elevating something bad into a success they are only cheating themselves." (13)

Broadway is not a jungle, it is a machine into which a great many parts snugly interlock. yet each of these parts is brutalized; it has been deformed to fit smoothly." (22)

Yet America could easily have a great theatre of its own. It possesses every one of the elements; there is a strength, courage, humour, cash and a capacity for facing hard facts." (23)

"A deadly director is a director who brings no challenge to the conditioned reflexes that every department must contain." (44)

"When we say deadly, we never mean dead: we mean something depressingly active, but for this reason capable of change. The first step towards this change is facing the simple unattractive fact that most of what is called theatre anywhere in the world is a travesty of a word once full of sense." (45)

"Not least, the influence of television has been to accustom viewers of all classes all over the world to make instant judgement - at the moment they catch sight of a shot on the screen - so that the average adult continually situates scenes and characters unaided, with a 'good craftsman' helping with exposition and explanation." (42)

"Why theatre at all? What for? Is it an anachronism, a supernatural oddity, surviving like an old monument or a quaint custom? Why do we applaud, and what? Has the stage a real place in our lives? What function can it have? What could it serve? What could it explore? What are its special properties." (45-6) 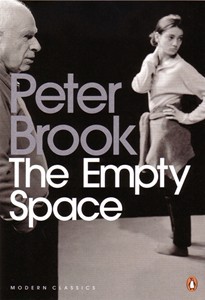